Vincent van Gogh owned a large number of Japanese prints. Find out more about his collection: discover why he collected these prints, where did he get them and what kind of prints he preferred.

In a single brief period in the winter of 1886–87, Vincent van Gogh bought 660 woodcuts from the Paris art dealer Siegfried Bing. In the attic of his gallery Van Gogh was able to browse the thousands of Japanese prints Bing offered for sale at low prices.

Van Gogh did not pick out the best-known or most expensive works. He preferred prints with bright colours and attractive motifs, such as geishas in kimonos and exotic landscapes.

Japan as an example

Van Gogh most likely bought the Japanese woodcuts on a whim. He intended to start trading in the prints. When nothing came of this plan he began to study them more closely in the course of 1887.

In the autumn of that year, he painted three copies of prints in his collection. He also worked them into the background of his portraits. The art of the future, Van Gogh was convinced, had to be colourful and joyous, just like Japanese printmaking.

Vincent surrounded himself with his Japanese prints in the Paris apartment he shared with his brother Theo. He pinned them to the walls of his studio, leaving holes that can still be seen today in a surprisingly large number of them. Some even have paint or oil stains. Zoom in on the corners of the prints to see these traces of use.

We know that Van Gogh also had the prints lying around as he worked. Although he moved house regularly, he always took a number of them with him. Having the prints close at hand enabled him to study them ‘calmly and at length’.

After a year or so, he no longer needed them to see the world ‘with a more Japanese eye’. Van Gogh had assimilated the stylistic features of Japanese art in his own work. From 1888 and his time in Arles (southern France) onwards, his compositions became flatter, more intense in colour, with clear lines and decorative patterns.

In the Van Gogh Museum

Theo and later his widow, Jo van Gogh-Bonger, took good care of Van Gogh’s Japanese prints, so that the majority of them eventually found their way into the Van Gogh Museum.

You can view over 500 colourful works from his collection and admire them just as Van Gogh himself did.

Alongside the online presentation of Japanese prints, a book is published that explores Van Gogh's collection in detail and offers fresh insights: Japanese Prints. The Collection of Vincent van Gogh.

Based on new research, the authors analyse the composition and quality of the collection. The publication features nearly 150 prints owned by Van Gogh. Written by Chris Uhlenbeck, Louis van Tilborgh and Shigeru Oikawa. Available in English and Dutch. Price: € 35.

What did Van Gogh learn from Japanese art? 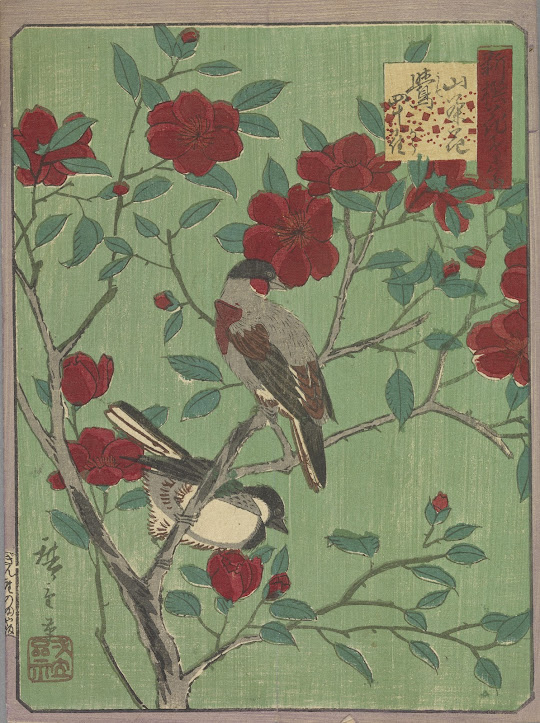 In Paris, Vincent van Gogh fell under the spell of Japanese woodcuts. They changed his art forever. Find out how