They're home again! Van Gogh’s 'Seascape at Scheveningen' and 'Congregation Leaving the Reformed Church in Nuenen' are on display in the museum’s permanent collection from 22 March until 14 May 2017. After 14 years these stolen paintings are back at the Van Gogh Museum.

From 22 March until 14 May 2017 a special exhibition revolving around the recovered paintings is on view in the Van Gogh Museum. After that, the paintings will be restored.

On 30 September 2016 we announced that two missing Van Gogh paintings have been recovered in the district of Naples, Italy. It concerned the two paintings that were stolen from the Van Gogh Museum in 2002.

The stolen paintings were recovered during a massive, continuing investigation commissioned by the Italian Public Prosecutions Department, conducted by a specialized Guardia di Finanza team, the team investigating organized crime.

The art historical value of the paintings for the collection is huge. Seascape at Scheveningen is the only painting in our museum collection dating from Van Gogh's period in The Hague (1881-1883). It is one of the only two seascapes that he painted during his years in the Netherlands and it is a striking example of Van Gogh's early style of painting, already showing his highly individual character.

In 1885, after his father's death, Van Gogh reworked the painting and added the churchgoers in the foreground, among them a few women in shawls worn in times of mourning. This may be a reference to his father's death. The strong biographical undertones make this a work of great emotional value.

The museum collection does not include any other painting depicting the church. Moreover, it is the only painting in the Van Gogh Museum collection still in its original stretcher frame. This frame is covered in splashes of paint because Van Gogh probably cleaned his brushes on it.

Evening of the Return

Join the Evening of the Return on Saturday 3 May 2017 – one of the last opportunities to see the two works before they head off to be restored. Enjoy a full evening’s programme with talks, workshops, guided tours, DJs and delicious drinks.

Join a free short tour every Thursday afternoon at 3:30 pm. Until mid-May the Gallery Talk is dedicated to the two recovered paintings.

Would you like to visit the church Van Gogh depicted? Book a day trip to the village where Vincent van Gogh lived from 1883 until 1885 and walk in his footsteps. In the afternoon, you'll return to Amsterdam for a visit to the Van Gogh Museum.

The return of the paintings to the Netherlands, the research and restoration are made possible by the generous support of the Dutch Ministry of Education, Culture and Science, the BankGiro Lottery, Van Lanschot, Heineken, Kikkoman Foods Europe B.V. and Bulgari.

Hizkia Van Kralingen and Hilton Hotel Amsterdam facilitated the transport and presentation of the recovered works. 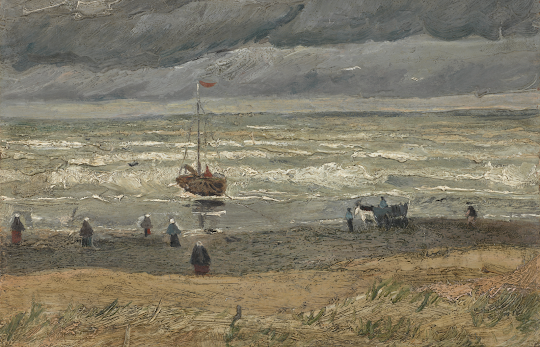 Why are the two recovered paintings so important in Van Gogh’s body of work? Read the story