Paris! The City of Light has been an inspiration for centuries. Discover Paris through the eyes and hearts of eight Dutch artists in the exhibition 'The Dutch in Paris 1789–1914. Van Spaendonck, Jongkind, Van Gogh, Van Dongen, Mondrian'.

In the 19th century, Paris truly beguiled artists from all over Europe. Large numbers of them left their native countries to go where the action was.

Not only did artists like Claude Monet and Pablo Picasso influence the work of Dutch artists, the Dutch left their mark on French art too. For example, it was Jongkind who taught Monet, Boudin and Sisley how to capture light on the canvas.

Dutch painters returning home from Paris influenced their fellow artists in the Netherlands. Breitner brought French impressionism back home, prompting Isaac Israels to paint ballerinas and nudes. These were subjects that had previously been quite unusual among Dutch artists.

The exhibition The Dutch in Paris 1789-1914 is the first large-scale exhibition to illuminate this thrilling artistic interaction.

Discover the rural side of Paris in charming prints of Montmartre. Around the turn of the century, artist and printmaker Eugène Delâtre captured the rustic character of this Parisian district. A selection of this work is on view in the print cabinet.

Get to know the eight artists with the special multimedia guide. See Paris through their eyes and discover more about the artworks featured in the exhibition. You can book the multimedia guide online at the same time as your museum ticket.

Discover what it was about Paris that attracted artists like Van Spaendonck, Jongkind, Van Gogh, Van Dongen and Mondrian. Book your private guided tour and get the best out of the exhibition.

Why were Dutch artists drawn to Paris? To find out more about the irresistible appeal of 19th-century Paris, attend the free lecture in English on Sunday 3 December. Lectures will also be held in Dutch on 22 October 2017, 5 November 2017, and 7 January 2018.

The exhibition is accompanied by a richly-illustrated publication exploring the mutual inspiration between Dutch and French artists in 19th century Paris. The catalogue is available now in the museumstores and in the webstore.

The Dutch in Barbizon

The French town of Barbizon was also popular in the 19th century with Dutch artists. From 27 October 2017 until 7 January 2018 the Mesdag Collection in The Hague will focus on this theme in The Dutch in Barbizon: Maris, Mauve, Weissenbruch. This exhibition perfectly complements The Dutch in Paris 1789-1914.

The museum is also supported by Supporting Friends: The Sunflower Collective and the Blom-de Wagt Foundation.

The exhibition is made possible by the generous support of: 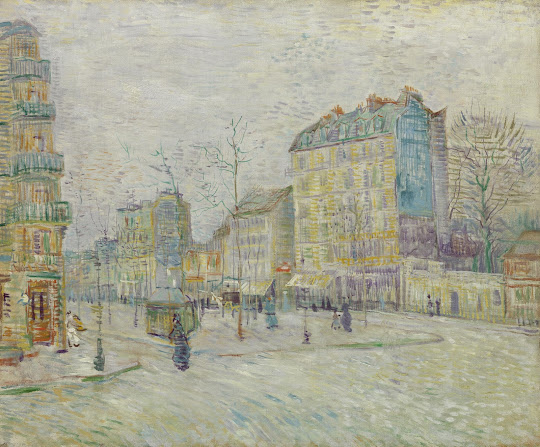 Why did Vincent van Gogh, like many other artists, go to Paris? Read the story