Of the many sketchbooks that Vincent van Gogh must have owned, only four have stood the test of time. These unique sketchbooks are now available as limited edition facsimiles, together with two notebooks, several loose sketches and a letter.

Studying Van Gogh’s sketchbooks is like looking over his shoulder; it’s almost impossible to get closer to the artist. This facsimile edition features the four sketchbooks from the years that Van Gogh spent in Nuenen, Antwerp, Paris and Auvers-sur-Oise (1884-1890). They show how Van Gogh saw the world and how he practiced drawing extensively on his way to becoming an artist.

A total of 25 acclaimed Dutch companies and craftspeople were involved in the creation of the facsimiles. They worked together to create the most true-to-life reproduction. Every detail was taken into consideration: colour, materials, damage, stains, folds, creases and stretched elastic. This resulted in a reproduction that is identical to the original. The facsimile edition was produced in a limited run of 1,000 numbered copies.

The edition is available now in the Van Gogh Museum webstore, the online shop and at various Dutch bookstores.

The facsimiles are presented in a walnut wood cube, based on the ‘Rietveld size’ of 35 x 35 x 35 cm. Each reproduction comes in a separate felt-lined drawer, which can be opened from all four sides of the cube. In addition to the sketchbooks, this edition features reproductions of loose sketchbook drawings and two notebooks containing cheerful drawings that Van Gogh made for Betsy Tersteeg, the young daughter of Hermanus Tersteeg, Van Gogh’s manager at the Goupil & Cie art dealership.

The edition is accompanied by a richly-illustrated book introducing the works and the period in which Van Gogh used these sketchbooks. An interchangeable walnut wood picture frame is included on the underside of the cube, which can be used to display the loose sketches. The cube also comes with drawing supplies, allowing you to experience how the materials Van Gogh used in his sketchbooks looked.

Vincent van Gogh is best known for his colourful paintings, but he was also an accomplished draughtsman. Of the many sketchbooks that Van Gogh must have owned, only four from his years as an artist have stood the test of time. These sketchbooks are all part of the Van Gogh Museum collection, but are rarely put on public display due to their vulnerability. The Van Gogh Museum therefore decided to publish limited edition facsimiles of the four sketchbooks.

This facsimile edition is an initiative of Van Gogh Museum Enterprises in collaboration with Uitgeverij Komma. The edition was designed by Typography Interiority & Other Serious Matters and distributed by Coen Sligting Bookimport. 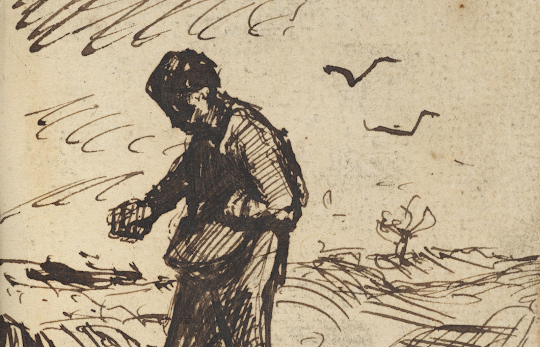 Browse the original sketchbooks in the online collection 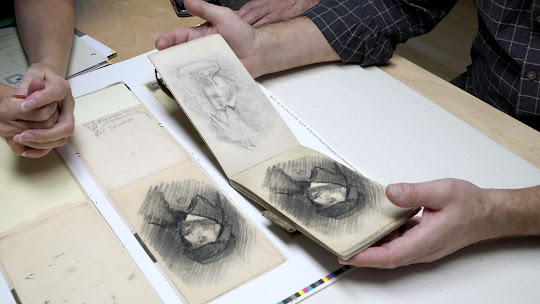 Order the facsimile edition in the museum webstore