During his time in London, Vincent visited famous institutions like the British Museum and the National Gallery, where the works he admired included those by ‘peasant painters’ such as François Millet and Jules Breton. He also read everything from museum guides and magazines to literature and poetry.

Vincent was transferred to Paris in 1875 – a period in which he became increasingly religious. The letters he wrote to Theo at this time are full of Bible quotes and accounts of church services and sermons.

Despite his interest in art, Vincent was less and less enamoured with his job at the art firm. The feeling was mutual, and in 1876 Goupil dismissed him.

When I saw Mr Boussod again I asked if His Hon. indeed thought it a good thing for me to go on working in the firm this year, since His Hon. had never had any very serious complaints against me.
The latter was indeed the case, though, and His Hon. took the words out of my mouth, so to speak, saying that I would leave on 1 April...'

Following his dismissal from Goupil, Vincent returned to England, where he worked as an unpaid assistant teacher at a boys’ boarding school in Ramsgate. He later found a salaried position at a private school run by a vicar in Isleworth near London. He was allowed to preach at the school and in the surrounding villages, but the job offered very few prospects. Vincent spent Christmas 1876 with his parents in Brabant, where his father advised him not to return to England. Van Gogh decided to follow his advice.

Uncle Cent came to the rescue again, finding Vincent a job serving in a bookshop in Dordrecht, near Rotterdam, in January 1877. But he was becoming increasingly religious once again, and his parents were by now seriously worried – Vincent was already 24 and still had no clear purpose in life. A few months later, they agreed to his plan to study theology. Van Gogh had not finished school, however, so he first had to sit an entrance exam.

Vincent spent a year in Amsterdam, living with an uncle. Another uncle, who was a minister, helped him prepare for his theology entrance exam. All this family support came to nothing, however, as Vincent lacked the discipline to study. He preferred to wander around the city and take long walks in the surrounding countryside. After a while, his uncle the minister advised him to forget about his studies.

Despite abandoning his study plans, Vincent was still eager to serve God. He left Amsterdam to pursue a new mission in Belgium, where he worked as a lay preacher in the Borinage mining region. He taught, visited the sick and gave Bible readings.

'It’s a sombre place, and at first sight everything around it has something dismal and deathly about it. The workers there are usually people, emaciated and pale owing to fever, who look exhausted and haggard, weather-beaten and prematurely old, the women generally sallow and withered.'

The Christ of the Coal Mine

Vincent lived among the miners and their families in the Borinage, sharing their poverty. He slept on the floor and gave away his possessions. His dedication was such that he was nicknamed ‘The Christ of the Coal Mine’. Vincent nevertheless failed to establish a close-knit community of worshippers and his contract was not renewed.

Vincent often included little sketches in the letters he sent his brother Theo and sometimes enclosed a drawing of what he had seen. This eventually led to a turning point in his life, when Theo advised him to concentrate more on his drawing. Vincent now became convinced that he could also serve God as an artist. He moved to Brussels in October 1880, where he began to work on his drawing technique and came into contact with other artists. He no longer had a paid job, so Theo sent him money from time to time.

'I heard from Pa that you’ve already been sending me money without my knowing it, and in doing so are effectively helping me to get along. For this accept my heartfelt thanks.' 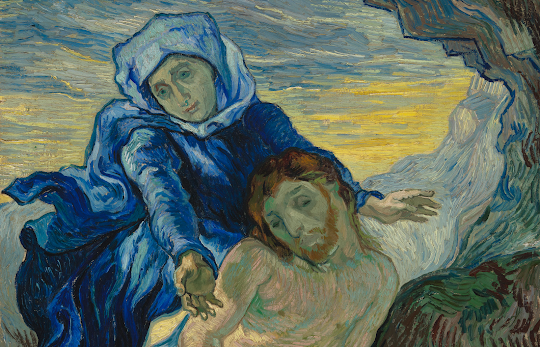 How did Vincent van Gogh find inspiration from prints and magazine illustrations?