What did Van Gogh's paintings look like shortly after he painted them? This has been researched in REVIGO. The results? Van Gogh's bright color use was originally even brighter.

‘All the colours that Impressionism has made fashionable are unstable’, Van Gogh wrote from Arles to his brother Theo, underlining the sentence to emphasize the gravity of the matter. ‘All the more reason’, he continued, ‘boldly to use them too raw, time will only soften them too much’ (letter 595). He was right.

The REVIGO (REassessing VIncent van GOgh) research project was launched four years ago to gain a clearer understanding of the extent to which his colours have diminished in intensity. Ironically, Van Gogh wrote the relevant letter in a purple ink that was just as unstable as certain of the pigments he painted with. Several drawings he made with the same ink have likewise discoloured and faded dramatically – another aspect studied by the REVIGO project.

During the REVIGO project we acquired an immense amount of knowledge about the discoloration of pigments and how the colour balance in Van Gogh's French work has been distorted or damaged. However, by no means all the questions have been answered. Research into discoloration will therefore continue after REVIGO, in order to place Van Gogh’s bold use of colour in better context. It is an odd thought, after all, that paintings that are still among the most colourful in the history of art, were once even bolder. 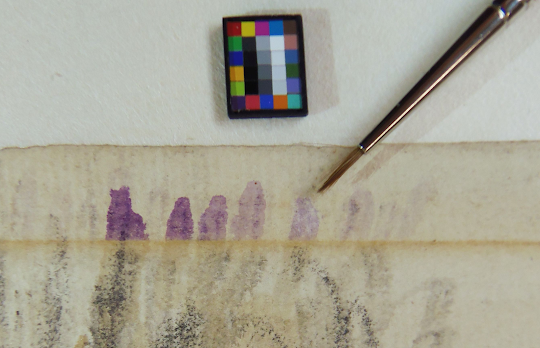 How did the colours of the inks in Van gogh's drawings change over time? Read on