The painter of Sunflowers

Nowadays Vincent van Gogh is known as the man who painted Sunflowers. He painted sunflowers as no one before him had ever done.
Vincent didn't always paint in the bright he's now so famous for. So, how did he come to create his masterpiece?

From a single sunflower to a vase full of them

Vincent began painting a single sunflower in a vegetable garden, and ended up with a work that became world-famous. There were just two years in between the two works, during which he underwent rapid artistic development.

Look at the colours of these three paintings. Those in the painting on the left are much less bright than in the other two. Over the two years, Vincent grew ever bolder in experimenting with colour.

Vincent drew and painted his first sunflowers in the Parisian neighborhood of Montmartre. Vincent was 33 years old when he moved to Paris in 1886, but he missed the outdoor life that he knew from home.
On walks through Paris, Vincent preferred to seek out places with lots of greenery. He found one such green and peaceful setting in Montmartre. He liked to go there to paint.

Sometimes Vincent painted people next to his sunflowers. There was a good reason for this. Compared to the sunflowers, the figures look small, and so the sunflowers seem even bigger. This was Vincent’s way of emphasizing just how impressively tall these flowers can grow.

A dramatic touch of colour

When we think of sunflowers nowadays, our thoughts quickly turn to big fields full of yellow flowers. But those fields did not exist in Vincent’s day.
Sunflowers grew in vegetable gardens, surrounded by other plants. This made them interesting for painters who loved colours. A yellow flower among the green was an exciting contrast.

The sunflowers in Montmartre were not the first flowers Vincent painted. After he had seen the fresh, colourful paintings of the Impressionists in Paris, Vincent wanted to put more colour in his work too.
Flowers were excellent practice material. So for a while he painted ‘nothing but flowers’. Floral still lifes were also selling well at the time. He hoped to sell his flower paintings, but had no luck.

This vase is neatly positioned in the centre of the painting. To make the composition a little less rigid, there are also a few separate flowers lying on the table. Many painters did this in the 19th century. And Vincent did the same, in the hope of selling some works.

Lots of painters who specialized in still lifes lived and worked in Paris. Vincent admired their work. Some of these artists had one particular flower as a trademark. For Georges Jeannin, for example, it was the peony.

Vincent got to know the work of the artists who were regarded as the most important painters of floral still lifes. Henri Fantin-Latour was just one of those big names.

Vincent chose a traditional theme for this still life, but tried to give it a modern twist of his own. The colours are rather bright. The brushstrokes are loose, and the paint has been applied quite thickly. Traditional painters painted with a thin and smooth layer of paint and with colours that were less bright.

A leading role for the sunflower

Few artists were interested in sunflowers, which were considered 'coarse', inelegant plants. But, in Vincent’s opinion, that was what made them interesting. Moreover, he chose flowers that were withered and dead. And they weren’t neatly arranged in a vase either, but lying separately on the table.
Vincent wasn't the first to paint sunflowers, but he was one of the first who gave the flower the leading role in a number of floral still lifes.

Vincent's sunflowers are in plain sight here. When other artists painted these flowers, they tended to hide them in mixed bouquets. They used them merely as yellow accents to brighten a floral still life. But still lifes with just sunflowers? Those were rare.

Vincent experimented with different brushstrokes and increasingly extreme colour contrasts. For example, he placed the yellow flowers against a bright-blue background.
The still lifes impressed his fellow artist Paul Gauguin. Vincent saw this as a great honour. He had just got to know Gauguin, and he looked up to him. The fact that this artist appreciated his work confirmed his feeling that he was on the right track.

Paul Gauguin, On the Banks of the River at Martinique, 1887

Gauguin saw Vincent’s still lifes of dead sunflowers in Paris. He must have been impressed, as the artists decided to make an exchange: two still lifes of sunflowers for one work by Gauguin. Vincent admired his older colleague, who had already built up a reputation as a painter. So he no doubt had a rather modest attitude towards Gauguin.

More and more colour
Vincent went further and further in his experiments with colour. This can clearly be seen if you compare his oil sketch of two dead sunflowers with the final painting. 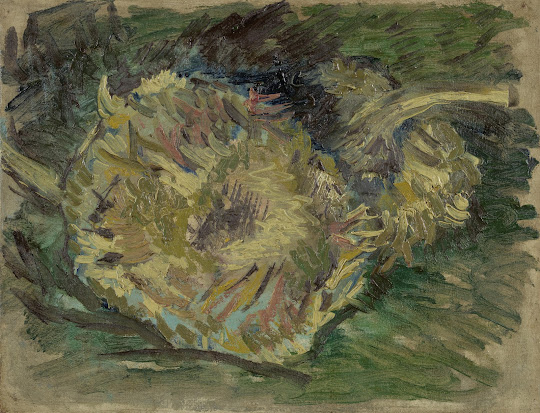 Vincent also painted a still life with four dead sunflowers. He did not complete this work.

If Jeannin has the peony, Quost the hollyhock, I indeed, before others, have taken the sunflower.

Sunflowers in the south

After two years in Paris, Vincent moved to Arles, in the south of France. He hoped that the light and the colours of the south would provide him with inspiration.
Vincent invited Gauguin to join him. Vincent was really looking forward to his friend’s arrival. He decided to paint a number of still lifes to welcome him. It was obvious what he was going to paint: sunflowers.

Vincent did not place the flowers on a table this time, but in a vase. At first he painted them against blue backgrounds: from a pale greenish-blue to royal blue. He wanted the contrast between yellow and blue to be reminiscent of stained-glass windows.
However, after three still lifes, he decided to continue with yellow: yellow flowers on a yellow background. He called this ‘light on light’.

Vincent was now truly captivated by this subject. He had ambitious plans: he wanted to decorate his house with six paintings of sunflowers. Later, he even mentioned twelve paintings. By the end of the summer, when the flowering season was over, he had finished four still lifes.

A house full of paintings

'The house will be just full of paintings from top to bottom. The room [...] Gauguin will stay if Gauguin comes, will have a decoration of large yellow sunflowers on its white walls.'

Gauguin was enthusiastic about these still lifes of sunflowers, just as Vincent had hoped. And, like Vincent, he thought that the last version, a yellow one, was the most successful. This motivated Vincent to paint the yellow painting another two times. He called these new versions ‘repetitions’ .

It might seem a little strange that Vincent painted his own works again. But he often did that, particularly when he was pleased with a painting. In this case, he also had another reason. Gauguin wanted the painting, but Vincent did not want to lose it.

Another painting with several ‘repetitions’ is Vincent’s La Berceuse. Vincent made no fewer than five different versions of this portrait. The model was Augustine Roulin, the wife of Vincent’s friend Joseph Roulin. 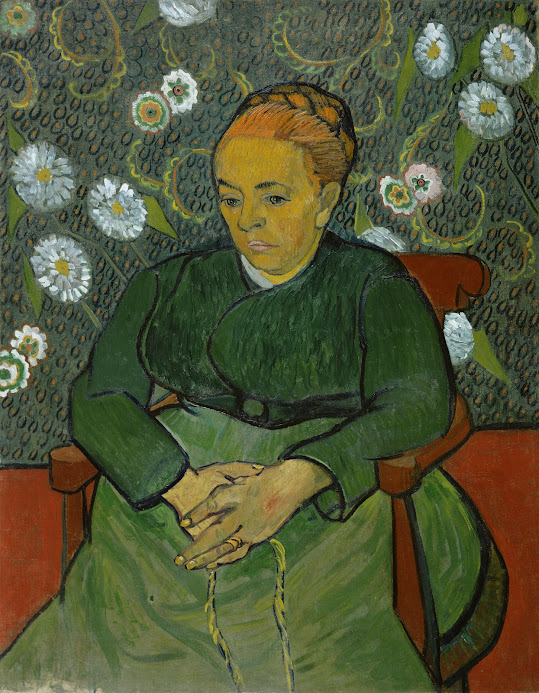 Gauguin portrayed his friend here as the painter of sunflowers. But he slightly adapted the true situation to suit his own purposes. It looks as if Vincent is copying a vase of real sunflowers to paint his work. However, that is impossible.
Gauguin painted this portrait in late autumn, when there were no more sunflowers. Vincent did not copy real flowers, but his own painting: the first yellow Sunflowers.

The painter of the sunflowers

Vincent knew that he had made something special. He was proud of his achievement – and rightly so. Compared to the traditional dark still lifes, his sunflowers were an explosion of colour. He saw the beauty of withered flowers, just as he saw the beauty of weathered faces.
Other people were impressed too. His brother Theo loved his Sunflowers. Gauguin called the sunflower paintings ‘completely Vincent’ .

Vincent had previously experimented with different shades of yellow next to one another. In this still life from Paris, he tried out this combination. But with the sunflower paintings he took it much further, with thicker brushstrokes and flatter planes of colour. 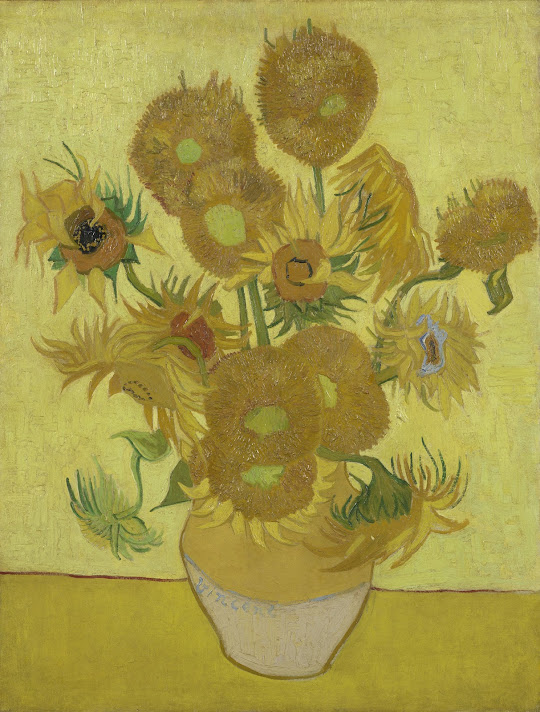 Vincent’s 'Sunflowers' paintings were made with a lot of paint. In some places, Vincent used thick brushstrokes to create structure. This can be seen particularly clearly in the flowers and in the background.

According to Vincent, he painted his sunflowers ‘with the three chrome yellows, yellow ochre and Veronese green and nothing else ’.<br></br>In fact, he did use a few more colours, but making a painting almost entirely with shades of one colour was still a daring choice.

It is impossible to miss Vincent’s signature here. He often signed a work when he was proud it, or when he wanted to give it away. This painting was intended for Gauguin.

(...) to be sufficiently heated up to melt those golds and those flower tones, not just anybody can do that, it takes an individual’s whole and entire energy and attention.

Vincent van Gogh to his brother Theo, from Arles. 1889

Meaning of the sunflowers

The sunflower paintings had a meaning for Vincent. He wrote that they were an expression of his gratitude. His intention was to make art that offers solace to troubled hearts.

Triptych
Vincent wanted to hang two still lifes of sunflowers on either side of his portrait La Berceuse. Together, the paintings would form a triptych, a group of three paintings. In a letter, he described how he envisaged the combination. 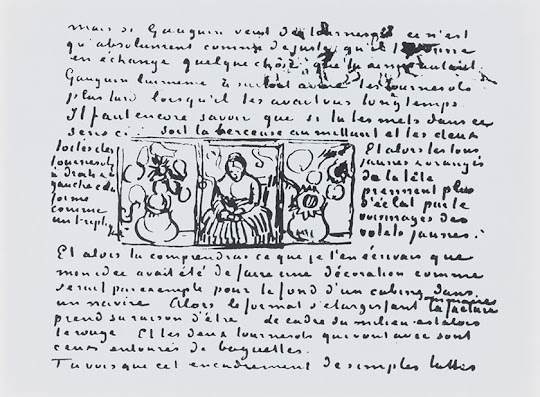 The sunflower has become inextricably associated with Vincent, just as he had hoped. His friends took sunflowers to his funeral.
Before long, the paintings were famous all over the world. Right from the beginning, they inspired many other artists. And to this day they are among Vincent’s most popular works.
Even now, so many years after his death, many people see him first and foremost as the painter of Sunflowers.

Almost thirty years after Vincent’s death, Isaac Israëls made this painting. He had borrowed Sunflowers from Jo van Gogh, the widow of Vincent’s brother Theo. Here we can see the simple white frame that the painting originally had.

Röntgen image of 'Sunflowers'. The original nails are still visible.

Vincent’s Sunflowers is now 130 years old. The Van Gogh Museum was keen to find out what state the painting was in, in order to preserve it in the best possible condition for future generations.

Extensive research and some light conservation work were completed in 2019. Discover more with the Unravel van Gogh app.