Vincent was a life-long admirer of the work of the landscape artist Charles-François Daubigny (1817–1878), whom he viewed as a major innovator in French painting. Daubigny kindled Vincent’s enthusiasm for the landscape. But he influenced him in other ways too...

...since I’d almost believe that these canvases will tell you what I can’t say in words, what I consider healthy and fortifying about the countryside.

As a young man, Vincent worked in the art trade, where he began to collect landscapes. There were two reproductions of Daubigny in his scrapbook.

Vincent liked the way the French artist depicted the landscape. He himself had grown up in the Brabant countryside, where he developed a lifelong love of nature. He recognised the same thing in Daubigny’s work.

Daubigny’s etching The Bush hung on the wall of Vincent’s room in Paris. Later, while living in Belgium, he asked his brother Theo if he could send him a copy of the etching. Vincent was trying to master the art of drawing, and he needed Daubigny as an example.

Shortly after becoming an artist, Vincent visited an exhibition of French art, where he saw five paintings by Daubigny. He was fascinated by A Road in Auvers. The houses in this painting reminded him of his native region around Zundert.

Vincent saw the adverse effect industry was having on the landscape. He longed for the peace and beauty of unspoiled nature. While out walking, he was deeply impressed by an area of dunes near The Hague, which reminded him of Daubigny’s landscapes. He painted the farmhouses in the meadows there.

That walk alone... made me much calmer because of a feeling that one hadn’t been alone but had talked to one of the old figures from the time of the beginning, Daubigny.

Daubigny was an influential painter in the 19th century. Unlike his predecessors, he painted nature as he saw it before him, with the feelings that the landscapes evoked in him. According to critics, he painted both ‘with the eye’ and ‘with the heart’.

His work was considered revolutionary in the mid-19th century. His painting technique also gave rise to a new movement in art.

Daubigny’s painting The Pond at Gylieu was received as a masterpiece. It earned him a medal at the 1853 Salon.

Daubigny took part regularly in the Salon in Paris, the most important art exhibition at the time.

The way Daubigny depicted this theme was unusual for his time. He did not paint the harvest idyllically, but realistically and without adornment. This was the painting that brought Daubigny to fame.

Daubigny regularly painted in the open air. It was unusual in his day to paint large canvases out of doors: artists only made small sketches outside, which they worked up later in the studio.

And that wasn’t all: Daubigny also had a boat converted into a studio to enable him to work on the water. From his vantage point in the middle of the river, he could now depict the reflections on the surface even more directly.

Claude Monet followed Daubigny’s example and bought a studio boat of his own. The vessel was almost the same shape as Daubigny’s, but was less spacious.

Monet mostly explored the river Seine in it. He liked to paint the water, the banks and the sky at unspoiled locations.

Daubigny depicted himself sitting in The Studio Boat, looking through the opening at the back of the cabin and painting the view.

His work during these boat trips included preparatory studies, which he later used for his paintings.

Charles-François Daubigny, Cliffs at Villerville-sur-Mer, 1864-72, The Mesdag Collection, The Hague

Cliffs at Villerville-sur-Mer was known for many years as the first painting to be executed entirely outdoors.

Recent research has revealed, however, that this is not entirely correct: it was not done completely in the open air. Daubigny continued to work on the painting several times in his studio.

He often left parts of the painting unfinished. In so doing, he inspired a new generation of artists, the Impressionists. Taking their cue from Daubigny, they drew less of a distinction between an ‘unfinished’ and a ‘finished’ painting.

The village of Barbizon, near Paris, was popular around 1845 with artists like Rousseau, Corot, Millet and Daubigny, who painted nature there as honestly as possible.

Artists had previously used landscapes primarily as a background for classical or historical scenes. The Barbizon painters elevated nature to a subject in its own right.

They worked in the open air, which called for a new way of painting, with fluid, sometimes sketchy brushstrokes. In this way, they had a large influence on the work of Vincent and the Impressionists.

Not everyone was full of praise for Daubigny’s work. Critics struggled with his lack of detail. Some viewed his paintings as no more than coloured sketches. Others, by contrast, recognised in his loose style the beginning of a new development in art.

Vincent van Gogh too viewed Daubigny as a pioneer of modern landscape painting. As an artist at the beginning of his career, what he most admired was the way Daubigny ‘translated’ his feelings into his landscapes.

He later began to pay more attention to the composition of the French artist’s paintings. In the ten years in which Vincent was active as an artist, Daubigny remained a point of reference for him.

Daubigny painted new subjects, such as this poppy field. He used bright colours, giving his own impression of the light in the process. Vincent found it inspiring. His own field is a rolling sea. The foreground is tilted, so you seem to be standing in the middle of it. 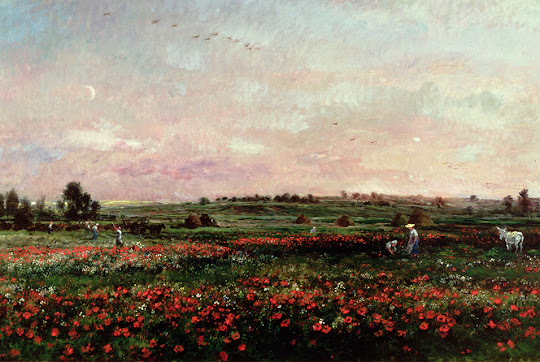 He doesn’t copy nature, he expresses it, and that with a feeling, a simplicity, which no other master can surpass.

The critic Emile Perrin in 1859 on Daubigny’s work

Vincent’s favourite works by Daubigny focus on the changing seasons. It was a subject that interested him greatly.

Like Daubigny, he painted orchards in bloom, seeing them as a symbol of new life.

Daubigny painted orchards in bloom almost every spring. He was the first to capture the subject. Monet also depicted fruit trees in flower. He painted the blossoms with loose brushstrokes and chose a high vantage point, which enabled him to show the shadows cast by the trees more effectively. 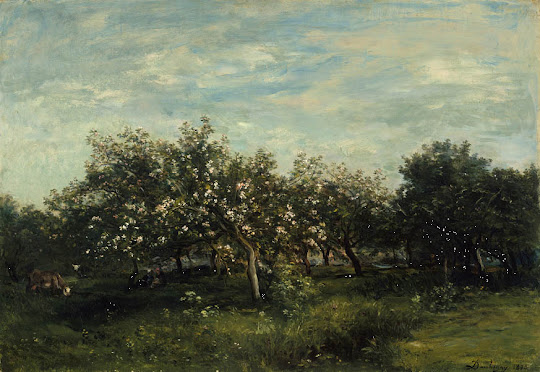 Vincent wanted to catch the constantly changing effect of the light in The White Orchard. He did so using small, loose brushstrokes and finished by outlining the branches in blue.

The painting is typical of Vincent’s style. It shows the influence not only of Daubigny’s painting technique, but also that of the Impressionists. The latter adopted Daubigny’s fluid, sketch-like painting style and took it much further still.

Daubigny chose large, non-standard formats for his canvases, which could not be bought ready-made. The ‘double-square’ canvas – with a width twice its height – was especially suited to his sweeping panoramas.

Towards the end of his life, Vincent used precisely the same canvas format.

The sky took up more and more space in Daubigny’s late paintings. The Harvesters is a good example. It shows the wheatfields near Auvers. Vincent later painted his own wheatfields. He wanted them to express sadness and extreme loneliness. The wide canvas gives the paintings a sweeping effect.

No matter what people say; we painters work better in the country, everything there speaks more clearly, everything holds firm, everything explains itself...

To his sister Willemien from Saint-Rémy-de-Provence, 20 January 1890

After all his wanderings, Vincent was looking for peace and new inspiration. He got the idea through his brother Theo of going to Auvers-sur-Oise near Paris. So it was that he ended up in the village where Daubigny had settled thirty years earlier.

Daubigny painted lots of village views in Auvers. Other artists who worked there also showed the effects of industrialisation on the countryside. Daubigny, by contrast, and Vincent after him, wanted to capture the ‘unspoiled’ Auvers. They concentrated on the farms, cottages and wheatfields in and around the village. 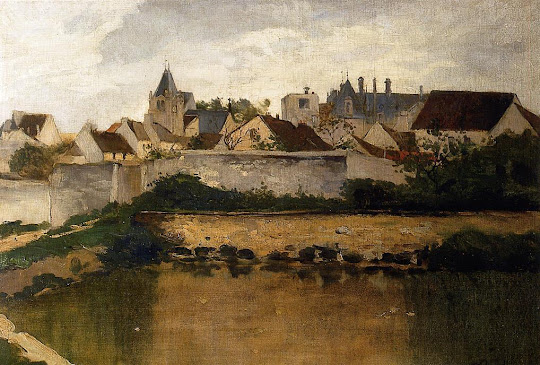 Vincent heard that Daubigny’s widow still lived in Auvers. He visited her straight away at her villa in the centre of the village.

The paintings he did in Madame Daubigny’s garden were a tribute to the artist he admired so much.

Vincent included a sketch of the painting Daubigny's Garden in a letter to his brother Theo. He wrote that it was one of his ‘most deliberate canvases’.

He included three other sketches in the letter of paintings of thatched roofs and wheatfields.

Vincent painted a large part of the garden on this substantial canvas. Madame Daubigny stands at the back, while a black cat walks across the foreground. He painted another large version too, which he gave to the widow

Vincent wanted to paint a large canvas of Daubigny's garden. He began with this small study. Since his stock of canvas had run out, he painted the work on a 50x50 cm tea towel.

The back of the painting, with red stripes along the top and bottom. These are characteristic for French towels that were sold just about everywhere in the 19th century.

…[the region has] changed since Daubigny. But not changed in an unpleasant way... no factories, but beautiful greenery in abundance.

Vincent died in the village where Daubigny had spent his final years. Both artists underwent a substantial evolution in their work.

And just as Daubigny had been an example to Vincent, so Vincent in turn became an inspiration to other artists. .

…it must be truly good, when one dies, to be conscious of having done a thing or two in truth, knowing that as a result one will continue to live in the memory of at least a few…

To Theo from Amsterdam, on Daubigny’s death, 3 March 1878