Artists’ portraits: portraits of and by an artist. 'In the Picture: Portraying the Artist' is the first exhibition at the Van Gogh Museum to focus on this genre. With more than 60 portraits from the period 1850 to 1920, the exhibition presents a multifaceted exploration of the role and significance of the artist’s portrait.

The exhibition unites a wide selection of major names and new faces. In addition to numerous self-portraits by Vincent van Gogh, including the renowned Self-Portrait with Bandaged Ear (1889) from The Courtauld Gallery in London and Self-Portrait (1889) from the National Museum in Oslo – the authenticity of which is no longer doubted – the exhibition also features portraits by artists including Edvard Munch, Thérèse Schwartze, Gustave Courbet, Berthe Morisot and Helene Schjerfbeck.

In the Picture also presents work by modern and contemporary artists who have been inspired by Van Gogh’s self-portraits, and addresses the many films devoted to the artist. The exhibition opens this Friday and will be on display at the Van Gogh Museum until 24 May 2020.

The person behind the art

In the course of the 19th century, the portrait as an artistic genre becomes increasingly popular. There is growing interest in the person behind the artwork, and in the artist as an inspired genius. Self-portraits, portraits of artists by each other and studio portraits are popular at the time, and are frequently produced. Painters create self-portraits to practise, to experiment or to set out their identity. They also make portraits of one another, often as a token of friendship. Artists’ portraits afford an excellent opportunity for painters to shape their public profile, allowing them to highlight their ideas on art and their lifestyle.

The exhibition explores the choices made by the artist in depth, revealing that a portrait often says more than you may initially think. Is the portrait aiming for a good resemblance, for an expression of the inner self or to create a particular image? A link is also made with the present day. Lisa Smit, Associate Curator at the Van Gogh Museum: ‘Self-representation and image creation is of all time. What do we show? And what do we hide? The exhibition reveals that these questions were also relevant in the 19th century’.

Van Gogh and the artist’s portrait

This is the first time that the Van Gogh Museum is devoting an exhibition to the genre of the artist’s portrait. The reason for doing so now is the loan from The Courtauld Gallery in London of Van Gogh’s Self-Portrait with Bandaged Ear (1889) since 2018. This iconic painting of Vincent van Gogh, pictured with his head bandaged, shows an artist both vulnerable and strong: he was distressed, but still continued painting. The work provides insight into the identity, image, self-contemplation and suffering of the artist: themes that also play a central role in the rest of the exhibition, which shows an extensive selection of artists’ portraits from the second half of the 19th century and early 20th century.

The exhibition features a total of 77 works, including 53 loans from countries such as France, the United States, England and Sweden. In addition to Self-Portrait with Bandaged Ear (1889) from London, another significant self-portrait by Vincent van Gogh is also on display: a loan from the National Museum in Oslo. The authenticity of this work was doubted for many years, but detailed research recently conducted into the work concluded that the portrait is indeed painted by Van Gogh, in 1889, in the days following a psychosis.

Alongside paintings by Vincent van Gogh, the exhibition also features work by artists including Edvard Munch, Gustave Courbet, John Singer Sargent and Francis Bacon. There are portraits by no less than 13 female artists, including major names such as Berthe Morisot, Charley Toorop and Thérèse Schwartze. In the Picture: Artists’ Portraits on Paper will run concurrently with the exhibition in the museum’s Print Cabinet: a presentation of prints and drawings from the Van Gogh Museum collection, complemented by several loans.

People throughout the world recognise the man with the red beard and intense expression, despite the fact that only a single portrait photograph of Van Gogh survives. Our image of Vincent is therefore primarily shaped by his self-portraits. In the Picture highlights the significant influence of Van Gogh’s self-portraits on the generations that followed him. Countless visual artists have been inspired by Van Gogh, acknowledging his impact with their own versions of the self-portraits. This is exemplified by the two paintings by Francis Bacon in the exhibition, in which he alludes to Van Gogh’s image as a constantly searching and suffering artist. Work by Emo Verkerk, Julian Schnabel and Guillaume Bruère is also on display.

In the Picture also addresses the many films made about Van Gogh’s life, including Lust for Life (1956) and At Eternity’s Gate (2018). The appearance of the actors in such films devoted to Van Gogh is often based directly on his self-portraits.

Lastly, 66 photographic portraits of pupils at Amsterdam schools will be exhibited in the Exhibition Wing stairwell: a project in collaboration with artist Maarten Bel. In these portraits, the pupils used everyday objects and materials in extraordinary ways, and were photographed against a simplified version of the background of Van Gogh’s Self-Portrait with Bandaged Ear (1889).

A special of word thanks should go to the various supporters of this exhibition. The museum owes a particular debt of gratitude to the Ministry of Education, Culture and Science, the BankGiro Loterij, Van Lanschot, ASML and the Bernhard Cultuurfonds for their generous support. 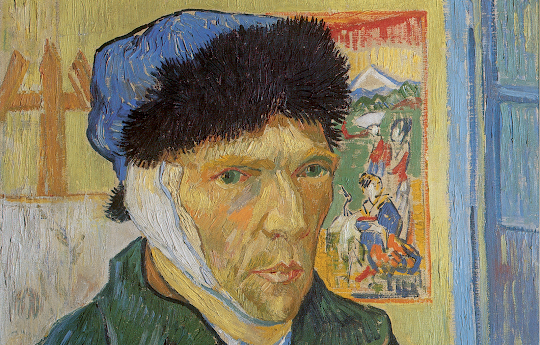 Find press releases and images related to the exhibition